The Odd Sea (with spoiler) 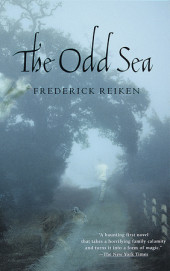 From the very first page I thought the location of this book sounded really familiar. Westfield River, the Hilltowns, Dalton, Cummington…like seeing a familiar face while on vacation far, far from home. You can’t place it, yet you know it. Why? Work? School? The neighborhood? Until finally, one last detail seals the deal and suddenly you remember – the cashier from your favorite grocery store. It was “Mohawk Trail” that finally brought Western Massachusetts into sharp focus for me. Without a doubt, I was reading about my stomping grounds (and lately, stomp I do).

So, back to The Odd Sea. This is Frederick Reiken’s first novel and I have to say, I have a soft spot for firsts. This is the haunting story of the Shumway family and their lives after the dissapearance of 16 year old Ethan Shumway. It’s told from the point of view of younger brother Philip. My copy of The Odd Sea has notes in the margins that I found distracting. They made suggestions and speculations I wouldn’t have considered otherwise as well as ones overly obvious. One of the repeating, clear-as-day themes of the notes was Philip’s inability to accept his brother’s vanishing as never-coming-back final. I considered that obvious because otherwise, there wouldn’t be a story to tell. Philip can’t move on like the rest of his family. He needs to dig for answers, search for clues, and come up empty, bewildered, and denying every single time. I wasn’t surprised when, by the end of the book, Ethan is never found.
After reading Ordinary People I was ready to start my own BookLust chapter on “Mothers Who Lose It.” Probably one of my favorite descriptions in the book is of Philip’s mother’s insomnia. Having been afflicted with sleeplessness I could picture her nocturnal habits perfectly. “Some nights she did not bake or read. Instead she’d stand out with the stars. She said on clear nights the sky could draw the sadness from her heart” (p 10). I also enjoyed the scene when Victoria teaches Philip’s sister, Dana, to eat rose petals. Having eaten a few island roses in my day, I could taste the silkiness on my own tongue.

This site uses Akismet to reduce spam. Learn how your comment data is processed.